I am putting this out there as A ) I don't know the answer B ) It's a good discussion to have. It seems we're collecting more chemistry minded folk that could hopefully explain this better to folks like me that aren't chemists* so we understand it better. @Silk City Distillers@Atarijedi

In relation to the Cousins Process: Part of this is to introduce a strong base (most use Lye, sodium hydroxide) to create a salt to precipitate out, collect the salts, then reintroduce the excess salts to the retort/thumper with an acid (namely Sulfuric acid),  to create an excess of available ester precursors, namely on the carboxylic acid side of the equation.

So the thing here is (from the Wiki article): Saponification reactions are ... almost totally irreversible.

1) So what we've discussed before here (sans the "irreversible" part) now seems unlikely but also what has been proven to work?

2) Is Sulfuric acid strong enough to break the bonds of the saponified fatty acids? Or is the sulfuric acid just acting as a catalyst to other reactive compounds?

3) Or does Saponification only affect longer chain carboxylic acids? (per Wiki: Soaps are salts of fatty acids and fatty acids are monomers of lipids that have long (at least 10) carbon chains )

4) Per #3, then only longer chain carboxylic acids are saponified, leaving them unusable for reactions, but leaving the shorter ones for reactions? Then this process will create conditions that create esters that are more likely to have esters with 9 or less carbon chains? I would suspect that would show if someone were to analyze the output of a normal run and a Cousins Process run, one would see higher levels of esters with less than 10 carbon molecules and similar levels at 10 or above.

*I only play one on the internet.

Okay so, the most basic and technically correct definition of a saponification (base hydrolysis) reaction, is when you turn an ester of any kind, into a carboxylic acid salt, aka a carboxylate. So turning ethyl acetate (aka ethyl ethanoate), a simple ester, into ethanol and sodium acetate, using sodium hydroxide as the base reactant, is technically a saponification reaction. But realistically, and over time, the world sorta shrunk the definition down to only fatty acid esters being turned into a soap of some kind.

So not all saponification reactions are the same. Wikipedia might like to tell you that they are almost irreversible, but that is quite untrue. What is true though is that it is very difficult to take a fatty acid salt (a soap), that was the result of reacting a base with a mono/di/tri-glyceride based ester in the presence of the right alcohol, and then reversing the process so you recreate that exact ester. It's even more difficult if you had multiple esters, formed multiple soaps, and then want to put everything back the way it was (just watch NileRed on youtube attempt it, doesn't go well).

The Cousins Process does work, and I will layout why it works. I'll break down the process and what is happening. I'm going to use ethyl caprylate (ethyl octanoate) as the example fatty acid ester, calcium hydroxide is the strong base used (aka milk of lime) in the process, and sulfuric acid is the strong acid used.

But first, before I get into that, it seems like a huge hassle to do the process. You can literally buy all the ester precursor acids, both simple and fatty acids, for not huge amounts of money. Acetic acid, butyric acid, lactic acid, oleic acid, caproic acid, caprylic acid, linoleic acid, etc... You could add them to some rum was, or feints, that you add into the still when you do a run, or you could put small amounts of them into a chemistry reflux setup, along with some ethanol, and create the esters themselves. Then just add them after distillation, or before distillation, to taste. Or you could just buy the esters themselves. Sure none of these are as romantic a notion, but it would create a more "known" and reproducible product, especially if you are adding esters (made or purchased) to the new make.

For the process itself, I'm not going to get into amounts, because that's more than I want to do right now to be honest, lol. I'll note that H.H. Cousins was pretty flippant with his terminology use, like ethers for esters, and lees for thumper-backset, the liquid you start with is the "waste liquor" from the thumpers, of which they would use between 1 and 3 (usually 2), I will refer to it as backset, since I don't want to conflate it with dunder(stillage) or muck. Finally, he mentions "high wines", which seem to be talking about the tails fraction. Specifically, the 2 thumpers at the end of the run would have "low wines" or low alcohol tails in first thumper, and "high wines" or high alcohol tails in the second thumper. So high alcohol tails is the "high wines", although I imagine in most of our cases, it would just be tails period, since I doubt many have 2 thumpers.

Okay, so now onto the process. It's a pretty simple process, but I made it sound more complicated than it is by explaining the chemistry that is happening.

1.  First thing is to create the fatty acid salts from an alkaline substance (alkalines are bases that are water soluble), and a fatty acid ester. They do this by mixing the calcium hydroxide into the thumper backset (from all thumpers), which disassociates (separates) into 1 calcium ion (Ca2+) and 2 hydroxide ions (-OH). One hydroxide ion will tear an ethyl group (CH3CH2) away from that ethyl caprylate and bond with it, creating ethanol (CH3CH2OH). So that turns the ethyl caprylate into caprylic acid. Immediately after that happens, the second hydroxide will attack the caprylic acid, tearing a hydrogen off the OH group on the end of the molecule creating a caprylate ion, leaving a free negatively charged oxygen ready for something positively charged to attach itself, and that positively charged thing is the calcium ion, at the same time as that calcium is attaching itself, the hydroxide bonds with that torn hydrogen and is turned into water. Technically speaking, since the calcium ion has a charge of 2+, and the oxygen is only 1-, than 2 caprylate ions will join with that 1 calcium. It looks like the following image (courtesy of PubChem). 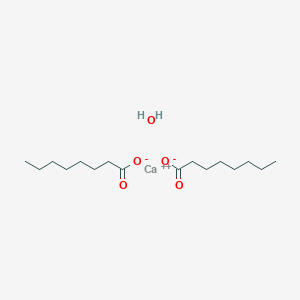 2. So now you have your fatty acid salt. These long chain fatty acid salts aren't all that water soluble, so it precipitates out of solution. You are supposed to collect them up by evaporating almost all of the liquid, and then remove it from the container and dry it out with gentle heat, or just in the air.

3. You are then supposed to mix your high wines (high alcohol tails), the fatty acid salts from step 2, and the sulfuric acid together. So what happens here. The sulfuric acid (H2SO4) will disassociate in the rum wash, you'll have 2 free hydrogen (2H) ions and 1 free sulfate (SO4) ion floating around (for every molecule of sulfuric acid). The 2 hydrogen ions will break the bonds between the caprylate and the calcium, and replace the calcium while freeing it, turning the caprylates back into 2 individual caprylic acid molecules. That free calcium ion will then bond to the free sulfate ion from the sulfuric acid, creating calcium sulfate which isn't very soluble in water or ethanol and should mostly precipitate out. You end up with the fatty acid caprylic acid, and calcium sulfate, if everything went perfectly. That fatty acid is intended to react with ethanol when distilling to make more ethyl caprylate. The process also performs a calcium chloride titration test to determine if the right amount of sulfuric acid was used, and tells you what to do if you are over or under.

This is what I believe is happening chemically, especially with the longer carbon chained fatty acid salts (6 carbons and up), since they aren't super soluble in water. The chemistry for the shorter ones might be a bit different, only insofar as they are more ionically bonded and less covalently bonded, so when they dissolve they naturally disassociate (e.g. calcium acetate is a short chain fatty acid salt, the calcium and acetate would separate on its own when put in water) so the acid doesn't need to tear the carboxylate away from the alkali ion. The outcome is the same though, so it doesn't really matter, but I thought I'd mention it.

I hope people understand what I just wrote, lol. I tried to simplify it as much as I could.

But it does work, sulfuric acid is strong enough to break that alkali-carboxylate bond in the fatty acid salt. I haven't done this specific Cousins process before, but I have done everything that happens in this process in other ways, including turning fatty acid salts back into fatty acids.

Both homedistiller, and reddit, have accounts of people attempting this process, links at the end of my comment. Not very many people in those threads seem to know much about chemistry either, so it's kinda a crap shoot going through it. It isn't a complex process, I mean it's only 3 steps, but it's more complex than it needs to be in this day and age. To do it properly, you would need to know a bit of chemistry, so you could choose the right compounds and calculate the correct amounts of those compounds, but the math is pretty easy.

The point of this process seems to be to make a super high ester rum-adjunct, that is to be used as an additive to add estery flavours to your new make rum. Personally, I think just adding the organic acids themselves to the still itself either during the stripping run, during the spirit run, or in a thumper during either runs would be vastly easier.

If you have any questions about what I wrote, fire away!

Thanks - that helps a lot.

It's actually a fun process to run the lab still reactions between a set of carboxylic acids, and a wider range of alcohols beyond ethanol to simulate tails fraction alcohols (isobutyl, isoamyl, n-propyl).  You almost always start with something awful, and end up with something wonderful (well ... at least better than what you started with).  Mix it all up together and you end up with something between Fruit Stripe Gum and a Sledgehammer.  I did these with my 7 year old daughter, she was amazed.

I really wonder if the TTB would approve the Cousins process if you submitted it via recipe.  I'd bet a stick of the above mentioned gum you'd get a rejection right off the bat.

Biotechnology for fun and profit...

I will say though, it's more than just the reactants from a simple reaction of ethanol and the carboxylics.  I've added the products of the lab still reactions to a glass of rum, and the end result is not at all comparable.  It's like looking at a chromatograph and just finding the largest peak, and assuming replicating that is going to be enough (it ain't).  Pretty sure Stephen from @bostonapothecarywould vehemently agree with this.

Or someone could post up the answer 10 seconds after I ask the question... ha! Thanks as always SCD.